Just looking around the internet one day when a product caught my eye. I’ve heard/seen of the DJI drones all over place but never anything from this company, Autel. Their main product is the EVO(they have a new EVO II now).I looked around for a bit to see if anyone had done any reversing work before on it and to my suprise it looked like new territory. So immediately I decided this was going to be a great new project to start.

What are we dealing with?

The Autel EVO https://auteldrones.com/products/evo
A consumer UAS to rival the DJI Mavic I figured that like most embedded devices the firmware update process would be similar, grab update from internet, place on sdcard, flash. Did some Googling around and came across the download page for the firwmare https://www.autelrobotics.com.au/pages/downloads

First things first, what do we got

Well thats not helpful how about checking if its compressed/encrypted.

Looks like only some of if it is uncompresed…interesting. Let’s see what we see in a hex view

Putting it all together

If we think of it like XML then we know that if "<filetransfer>" is parent then we should see an end tag, but there isn’t one. Also the " characters are not a typo, those apear to be part of the structure. It also looks like the highest level tag is a filetransfer and signifies the beginning of a file entry.

Next, a fileinfo tag follows, with no gap inbetween both tags. However after the "<fileinfo>" tag we see a couple bytes of space followed by what appears to be a filename. If it truly is a filename then we can guess that it probably is dynamic, meaning that the name can be changed. If we follow that thought path then the unpacker of the firmware needs to be able to figure out the length of the filename ahead of time.

If we assume the filename is header.json then the unpacker needs to know ahead of time to unpack 11 bytes (0x0B).

If we look, just after the start of the tag, we see 8 bytes before the filename starts. And lucky us what do we see, 00 00 00 0b. Boom, we know how the filename size is figured out. What about the next 4 bytes? Well I never fully figured those out (sorry), my guess is either a timestamp or some sort of CRC.

We have our last tag, "<filecontent>", and just by looking at the hexdump we can already tell that there is once again an 8 byte gap before what appears to be JSON starts.

For this one I took a guess that it probably follows the same structure as before and now that the tag is called filecontent I assumed it would be the file size. The remaining bytes, 8-field_size are the actual content of the file being transfered. Now we just need a parser to extract everything for us!

Structure as it stands

I’ve written a firmware parser that you can find on Github to unpack your EVO firmware https://github.com/anthok/autel 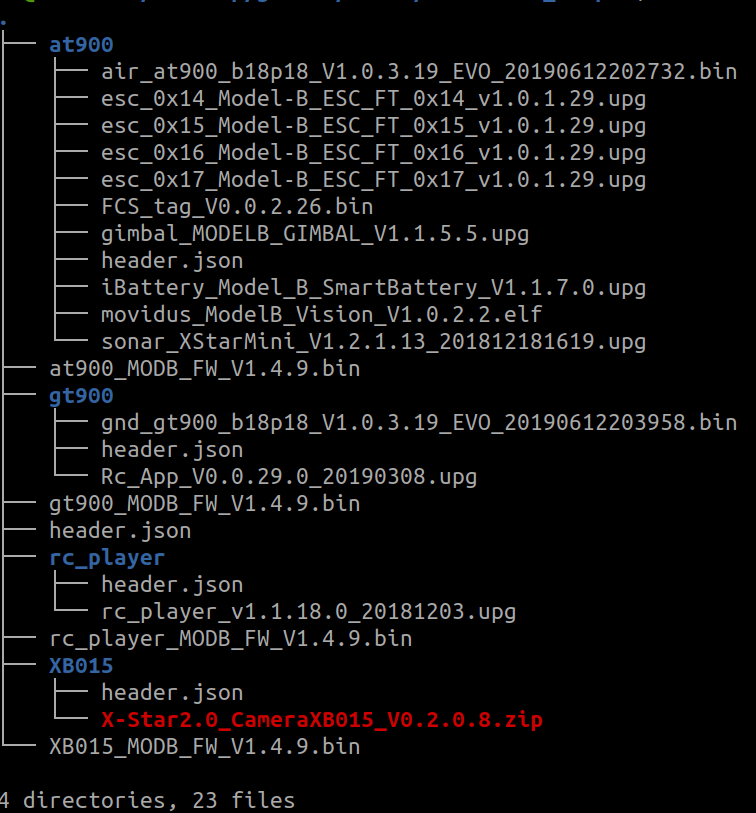